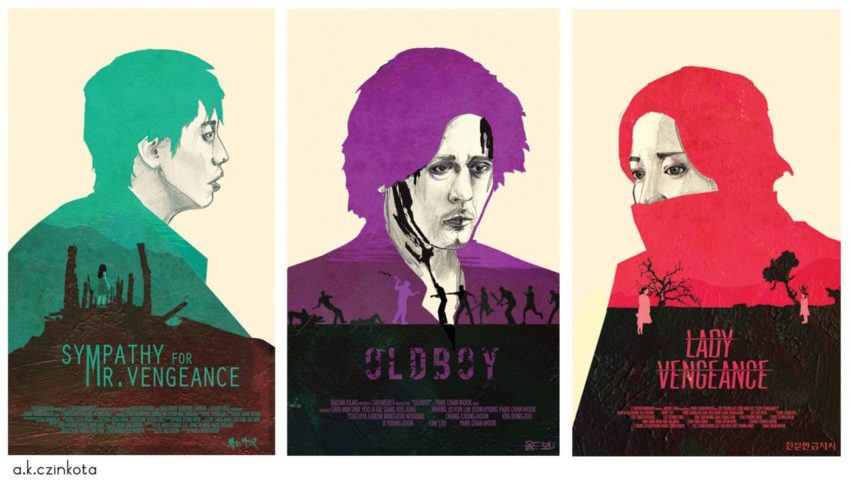 6 of the most satisfying hours of cinema I have ever had in my life!

So I do have a short attention span for long drawn out plots, no big secret. But this trilogy has taught me for Chan-wook Park…wait for it…wait for it…POW!!!

How does one make Dismemberment poetic? Ask Park.

This Trilogy has the most breath taking yet at times eerie and gruesome  cinematography I’ve ever seen, thanks to Byeong-il Kim, Chung-hoon Chung. And the stories are not left behind in lieu of great shots. They are just as artfully crafted. Bravo to the other writers as well (Lee Jae-sun, Lee Mu-yeong, Lee Yong-jong,Hwang Jo-yun,Lim Chun-hyeong, Lim Joon-hyung, Garon Tsuchiya, Jeong Seo-Kyeong).

What Park also shows is that pacing IS everything. With the varying speeds of each films tempo it could be quite easy for a director to make a bad mish-mosh, but Park shows a skill of the likes of Orson Wells. A true story teller.

(Psss: You don’t have to see them in order)

So it all goes down when Ryu wants to help his ailing sister.  A few kidneys, electric shock treatment, a botched kidnapping and cut tendons just go to show…Best laid plans…Holy bazooka. This one was a beautifully sad train wreck, where all I keep saying was “No way? He’s/She’s screwed” for different characters throughout the film.  Then at times the energy reminded me of Trainspotting. This flick had me at the first subtitle.

Well So many people know this movie. Yep, It’s violent with a freak of a twist ending. But it is also philosophical. How much should and does one know about ones self and the others around him?her? The story focuses around a man named Dae-su. Dae-su has lost a good part of his memory and must put the puzzle back together to discover what’d happened to his family and self.The film has a Memento feel in that the audience is trying to piece everything together with Dae-su using flashbacks and the help of a friend Dae-Han and his new found lover Mi-do.There are twists and turns, dumplings and death.Near the end you are left with a bad taste in  your mouth (pardon the pun, once you see it) and understand why Dae-su  makes his last decision. But did he?This movie makes you really think and doesn’t hold back. I applaud the writing and direction which left me in a baffled state of awe.

If revenge is a dish, best served cold…Bring on the “IN YOUR FACE” gelato!

Having just become a mom last year, this piece strikes an even more intense cord with me. This is the kinda of story that makes your dreams come true, in the sense that the payoff is SHOCKINGLY yummy. But then (yin/yang) a bitter sweet win. So, a nice lady goes to prison for a crime she didn’t commit. She makes friends. She gets out and gets even with the person that put her in jail. Interestingly enough, the film begins at the end of her incarceration with the wacky christian group meeting her at the exit of the prison. And much of the exposition done in flashbacks and montages. Still it’s very effective, poignant and thought provoking (as are the other 2 films) What’s the most shocking in this piece is the revenge. Without giving too much away, let’s just say-(for the record) “I would have done it too.” In the end of this piece all learn that revenge does change the past or present, but maybe (depending on the film) it can help one cope with the the future…or not.

Other films from Chan-wook Park

If you are interesting in buying these titles, click on the Title link of each movie.