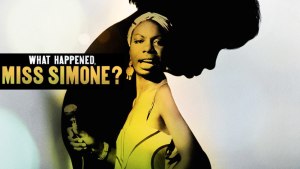 Hands down, this documentary opening is the most captivating, that I’ve ever seen.

Many artist claim to give themselves to the audience but here we are observed by Nina!

Are we worthy of her performance?

We wait in silence as she takes the stage. She stares at the audience. This strange pause becomes intriguing and finally mesmerizing. Again, it’s as if Nina is deciding whether or not the audience deserves her storytelling.

This documentary is lush of full of thoughtfulness, love, anger, and passion. You become immersed in her journey as much as her music. From her very basic and savant beginnings as a classical music student, gifted but not admitted into a music school due to her color to career highs and lows as the Civil rights movement shakes her and her music to the core.

Mississippi God$amn  would be an important turning point for Nina’s raw angst to be vocalized in the midst of  the Civil Rights Movement. Nina became so engross and WOKE and AWARE, that she left the country and things would never be the same.

The film is powerful. The woman was powerful. And her legacy will always live on.