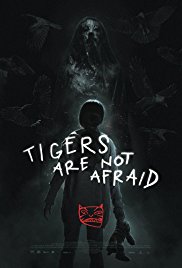 Written by Issa  by Lopez

Vuelven (Tigers Are Not Afraid) is the most hauntingly beautiful Ghost Story from writer/director Issa Lopez who channels not only a poetic truth of drug wars through children’s eyes, but also loss with such an eerie and heart-wrenching undertone of resilience through strife.

Vuelven tells the story of a small band of orphans who must navigate the cartel ruled streets of Mexico City to survive led by “El Shine” (Juan Ramon Lopez) They are tough, street smart, and taken aback when a girl “Estrella” (Paola Lara) enters their space. Initially an outsider among outsiders, Estrella slowly stalks the boys till they begrudgingly let her tag along as she too has recently lost her parent to the cartel wars and has a very deep connection that is profoundly supernatural to the dead. Things quickly become dangerous as the cartels move in hoping to make these children drug mules, which forces them to migrate to any place the cartel is not. When one child is captured, it prompts a showdown that will be devastating to both sides.

The film’s style feels thoughtfully cold and bleak as exploring the idea of children caught in the center of an on-going drug war should not be sugar-coated. It seems very few artistic element allude to a “vibrancy” in motif, with the exception of the tiger which symbolizes strength, courage and perseverance which each child has in the heart. Even the two opening scenes for the leads…Estrella (not doing a drill)  under her desk during a gun shoot out near her school and Shine finding a gun in an alley, speaks to the life that these children are growing up in as orphans to the war.

Vuelven (Tigers are not afraid) shows you youth absence of innocence with a dark sense of melancholy as it likens itself to other dark fairy tales like; Pan’s Labyrinth, Legend, The Dark Crystal, even Labyrinth without the need to land on rainbow’s end but instead to be brutally honest about the subject of “Wishes”.  On a technical note, and after having seen this @ Final Girls Horror Film Festival in Berlin I was over the moon to see such a great film written, directed and by produced women.

If your heart can take it (so sad) watch this must see film.