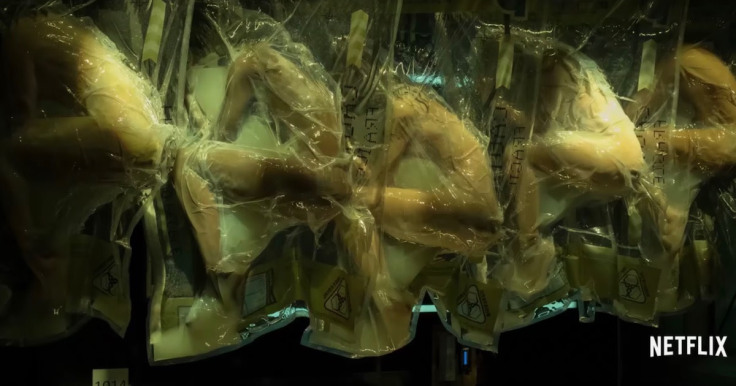 At the heart of this Neo-Noir series from Laeta Kalogridis, book by Richard K. Morgan on Netflix is the age old question “Is blood thicker than water?”

Main Plot: An Envoy (assassin for good) is hired by a wealthy business man to solve the businessman’s murder, but that’s only the tip of this complex iceburg of a series.

Backstory #1: In this world 300 years in the future,  human subconsciousness can be embedded into a small medallion called a “Stack” which can then be put into various “Sleeves” replica human skins.

Stronghold and his sister Reileen are orphans separated as children to different dark factions.Who, later in life find each other and became envoys (or assassins for Good) in a colony of people that do not believe people should live forever.  But sis isn’t quite happy that her brother is smitten with the leader…things go sideways and he (as well as all of the colony) die.

Fast Forward back to the murder mystery…Who Killed Bancroft?

Laurens Bancroft (played by James Purefoy-Resident Evil) controls and is surrounded by vultures and is not sure who shot him attempted to steal his wealth, thus he authorizes the stake of Stonghold (played by Will Yun Lee)  be placed in Takashi (played by Joel Kinnamen). This move has so many tangled ramification for both the stack and the sleeve as we learn that both men have very deep back stories and impact everyone they meet.

In general:  This Blade Runner-esque film is in a current batch of films like   th Matrix, Avatar, and even Advantageous that questions …what if we could save our consciousness, or memories or any part of our mental faculty and (in a way) live forever? Additionally, there are many great secondary stories introduced here in this complex series from; a father trying to keep is daughter’s consciousness safe, to a latina cop whose family has a religious imperative to not sleeve jump, to a fight club for sleeves and criminals.

Still at the heart of this series are two questions.

Is immortality a good thing?

Is family loyalty more important than everything and everyone else in the universe?